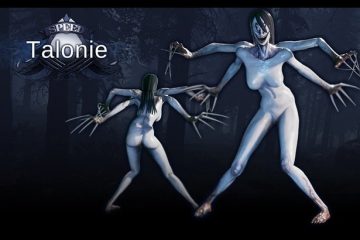 In 2018, which is getting closer to the end, it seems that it still makes the battle royale genre excellent for gamers and developers alike. Still adapting the same approach, the battle royale, one of the developers from Fukuoka, Japan, namely Qmax, announced his new project entitled Bless The Demon Puppets through the crowdfunding site Kickstarter.

Qmax himself claims that Bless The Demon Puppets will carry a genre they call “hardgore” battle royale and plans to be released for PC via Steam later. Hardgore itself might refer to a mix of hardcore and gore genres where you will find an atmosphere full of blood with games that really make you really have to focus.

In Bless The Demon Puppets each game will be attended by 30 players who will become horrible creatures. Just like the popular battle royale game today, players have to kill each other and certainly will find a lot of blood running around. The winner is those who managed to survive until the game ended. Besides this game also presents something unique where each player can choose characters that look like horrible creatures, each of course with different abilities and roles.

Qmax itself has estimated that this game will be released at the end of 2019. Well, will Bless The Demon Puppets bring fresh air with the battle royale approach combined with a terrible atmosphere in the style of Dead by Daylight. Oh yeah, if you are interested in supporting the Bless The Demon Puppets project you can visit their official page