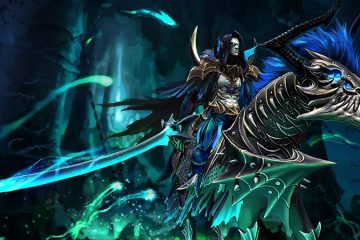 For those of you who like to play role tanks / support, Abaddon is certainly familiar to your ears. Abaddon is a Strength type hero who is very difficult to kill. According to the history of Warcraft III, Abaddon is a hero who holds the legendary Frostmourne sword.

Abaddon is often used as a support tanker, even though Abaddon is also suitable to be a carry hero, seeing the skill he has is qualified to become a carry hero.

Abaddon’s first skill was a very good skill to save friends. This skill allows you to heal your friends by sacrificing your own HP. This skill can also be used on your enemies.

The second skill, Apotic Shield is also a very good skill where you can give a shield to friends or yourself. When using this skill, the debuff status of friends will disappear automatically.

As a hero who can play many roles, Abaddon’s third skill is also very supportive, his Frostmourne skill allows Abaddon and his team mates to get additional movement and attack speed when attacking the same target as Abaddon. Of course this skill is very useful when the push tower and clash team.

Abaddon’s Borrowed Time is also very important where you will create a time gate around your body and reject death for a few seconds. When activating this skill, when you receive an attack from your opponent your HP will recover according to the damage you received.