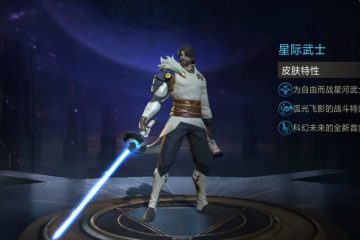 AOV seems to be more aggressive in the release of this year’s update, not satisfied with the release of many heroes lately, this game made by Tencent still has a lot of cards in ambitions to dominate the Moba Mobile market in the World especially Southeast Asia.

From Crossover, License and Art Work Good, with the theme “Similar to Iconic Character” seems to still be the main weapon of Moba in Indonesia famous thanks to the arrival of Batman and 7 Billion in 2017.

The new arrives again, Richter gets to feel Skin with Space / Space nuances through Star-style skin Wars that will be released soon on the official AOV servers in the World, what kind of skin is that? we see the photo below: But what crossed our head when we saw this? Cool? sure, that’s clear! but the impression of “our Iconic feel is more intense than our admiration for this skin”.

It’s a blend of The Witcher, Geralt which is very similar to the character of Richter itself, where they are both Hunter in their respective games. a former Demon Hunter who was willing to die to defend humanity until finally the majesty of the Demon Hunter was only a past for him, because the Demon Hunter was officially dissolved by the King until Richter became a Nomad, but even though he had officially become a Demon Hunter Richter he still held the principle that there the threat is mainly from the Demon so Richter will fight like the task of a Demon Hunter.

Richter also gained strength by means of special forces military-style training and experiments where a prospective Demon Hunter had to be combined with Abyss power or darkness, so that he could use darkness to fight evil forces.