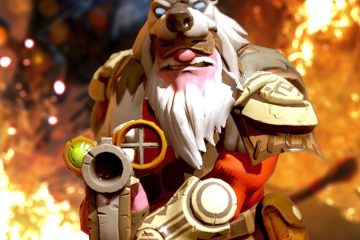 Sniper is a ranged agility hero in Dota 2 who have the longest attack range. He also have capability to dealing moderate to have damage to enemy unit. But Sniper have one weakness, he don’t have any escape mecanism, so enemy hero can kill him so easily if no backup from teammates.

His first skill is Shrapnel. This skill have three charge, so when you use this skill, you will consume one charge. Sniper will launch a small bomb that shower the target area. When enemy stand inside the burning mark, they will receive magical damage and slow effect.

As a Sniper, he also have headshot skill. This skill is a passive skill. Everytime Sniper hit an enemy, there is a precentage to give slow effect and extra phsycal damage. This skill also pierce spell immunity. This skill can give knock back effect if you up the tree talent.

His third skill is Take Aim. This skill improve attack range of Sniper. With this skill and Dragon Lance item combination, Sniper will have a very far distance attack. So enemy will be hard to come close to Sniper.

The ultimate skill of Sniper is Assasinate. Sniper will enter the Sniping mode and shot 1 deadly bullet to enemy. This skill can be used from very far distance. Assasinate will be a good finishing to chase enemy hero who run out HP.