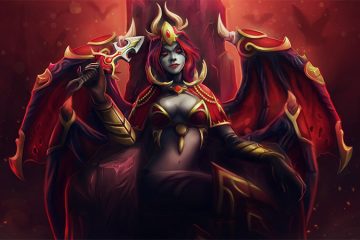 In playing the Dota 2 game, there are various heroes that we can use to win the game. In addition to hero selection, players are also required to understand the path mechanism chosen to maximize the ability of the hero. This time we will discuss about Queen Of Pain, the mid laner hero with terrible damage burst capabilities.

Queen Of Pain is an intelligent type hero with attack range type. It becomes a very effective hero to take down enemies quickly. Of course, this is because the QoP has a skill mechanism that provides great damage and effective in and out combat capabilities.

QoP’s farming skill is Shadow Strike. This skill will damage your opponent over time. Over time damage itself means damage per second, where opponents affected by the poisoned dagger belonging to QoP will get damage per second and a reduction in movement speed. For in and out into combat easily, QoP is equipped with Blink skills. This skill allows the QoP to jump in a certain direction quickly. With fast cooldown skills and which usage is small, QoP can easily damage and exit the battle easily.

When Blink towards an enemy, usually QoP will release a skill called Scream of Pain. QoP will emit sound waves that will injure the opponents around it.

The finishing move that QoP will do is to issue a skill called Sonic Wave. This skill is almost similar to his third skill, it’s just that the coverage area is wider and the damage is bigger and pure damage. Pure damage is pure damage that cannot be reduced even though you have purchased a defense item.