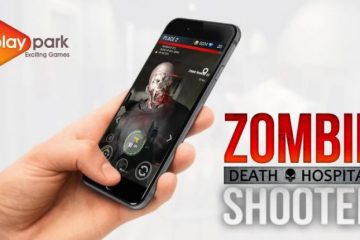 If you are a fan of games, of course you’re familiar to the Zombie game category? Yes, these horrible creatures that are often killed are often exploited by game developers to make horror-themed games. This game is quite fun to play, so many gamers excited to play this game.

One of them is a game developed by a company outside Playpark, which developed a zombie-themed mobile game called Zombie Shooter – Death Hospital.

Zombie Shooter – Death Hospital, is a Zombie Shooter game, which uses AR (Augmented Reality) technology where players can directly play and shoot zombies directly on the screen of their cellphone. Same but different from Pokemon GO.

This game takes the Horror theme where players are trapped in an old hospital inhabited by zombies. By using a weapon that was just discovered “accidentally” in the game, players will fight to survive, and shoot zombies that come to kill you.

Players will use their cellphone screen vertically, and move it around like using a camera to see zombies that will kill you and shoot them. Can you survive and find the mystery of the hospital? Immediately download and play this game on your Android phone! Zombie Shooter – Death Hospital, you can download it now on Google Playstore.